The Souliotes (or Souliots, Suliots; Greek: Σουλιώτες) were the inhabitants of Souli, a historic mountain settlement 73 km southeast of Igoumenitsa in Thesprotia and its surrounding areas in the mountains of Mourgana in Epirus in northwestern Greece. They established an autonomous association of villages resisting Ottoman rule in the 17th and 18th centuries. Souliotes became famous across Greece for their successful resistance against the local Ottoman governor Ali Pasha. After their defeat in 1803, the Souliotes were forced to move to other parts of Greece, and many of them later became active in the Greek War of Independence starting in 1821, under leaders such as Markos Botsaris and Kitsos Tzavelas.
Etymology:

Modern dictionaries derive "Souli" from Albanian suli, meaning mountain summit. In the nineteenth century, the poet Andreas Kalvos (1792 - 1869) had linked the name to the Selloi, the ancient priests of Zeus at the sanctuary of Dodona. Kalvos used this association in his ode "Εις Σούλι" ('To Souli') written in honor of the Souliotes' heroic role in the struggle for Greek independence.

Most sources agree that Souli was settled first by Greek and Arvanite settlers who moved up into the mountain areas from the coastal area of Thesprotia. Biris places the ultimate origin of these first Souliote settlers further north in Albania, arguing that their folk culture showed traces of Gheg rather than Tosk influence. According to one theory, they were of Greek and Albanian descent, who came to identify politically and ethnically as Greeks. 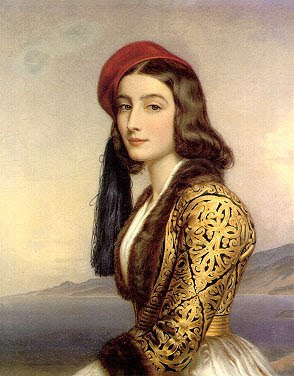 Portrait of Katharina "Rosa" Botsaris, daughter of Markos Botsaris by Joseph Stieler in 1841.

Irrespective of where the Souliotes came from, they were considered Greeks by their contemporaries. Many 19th century romantic men such as the Greek patriot Lambros Koutsonikas projected this into the past, and considered them descendants of Epirote Greeks who migrated to the mountains in ancient times in order to flee from Roman forces. However, other 19th century authors such as Christoforos Perraivos merely acknowledged the Souliotes' status as omogeneis (of Greek ancestry). Even though the Souliotes were of Greek descent and very patriotic, they did not establish a formal national identity since they collected taxes from both Greek and Turkish villages. Athanasios Psallidas, a secretary of Ali Pasha, stated that Souli (also known as Kakosouli) contained Greek fighters who fought against the Albanians for many years. An author of unknown origin stated that the Souliotes, under tyranny in Epirus, have proven that Greece still gives rise to individuals like Leonidas at Thermopylae. Aside from contemporary accounts, the Souliotes were known as Greeks even by their enemies. Beli Pasha, son of Ali Pasha, sent letters to his father from April to December 1803 calling the Souliotes "Romans" (Ρωμέους), "Romioi" (Ρωμιούς) and "Romegans" (Ρωμέγους), that is, ethnic Greeks. Ahmed Moufit, great-grandson of Ali Pasha's sister (Siachnisa), attempted to convert the Souliotes into Orthodox Albanians in his chronicles. He wrote angrily about how the Souliotes invited Ali Pasha's attack in 1789 because they called themselves Christian Greeks who became tools of Russia.

The core of Souli was the "Tetrachori" (Four Villages: Souli, Kiafa, Avariko and Samoniva), which are believed to have been founded some time around 1600 AD. The formation of the Four Villages occurred after settlers from the plains of Thesprotia migrated up into the mountains of Mourgas. The Souliotes established an autonomous confederacy dominating a large number of neighbouring villages in the remote mountainous areas of Epirus, where they could successfully resist Ottoman rule. At the height of its power, in the second half of the 18th century, the Souliot state is estimated to have comprised up to 12,000 inhabitants in about 60 villages.

The Ottoman Turks attempted numerous times to conquer the territories of the Souliot Confederacy. The first conflicts between the Souliotes and the Ottomans (including Muslim Albanians) date back to 1635, if not earlier. In 1731, Hadji Ahmed, pasha of Ioannina, received orders from the Sultan to subdue the Souliotes and he lost his army of 8000 men. In 1754, Mustafa Pasha lost his army to the Souliotes too. In the following years, Mustafa Kokka came in with 4000 soldiers and Bekir Pasha with 5000. In the end, both failed to defeat the Souliotes. In 1759, Dost Bey, commander of Dhelvinou, was defeated by the Souliotes and Mahmoud Aga of Margariti, the governor of Arta, suffered the same fate in 1762. In 1772, Suleyman Tsapari attacked the Souliotes with his army of 9000 men and was defeated. In 1775, Kurt Pasha sent a military expedition to Souli that ultimately failed. When Ali became pasha of Ioannina in 1788, he tried for 15 years to destroy the Souliotes. In 1792, his army of 3000 Turk-Albanians (Τουρκαλβανοί) was eliminated. Although he had hostages (such as Fotos Tzavellas who was the son of Lambros Tzavellas), the Souliotes fought bravely under the command of Georgios Botsaris, Lambros Tzavellas, and Dimos Drakos. Even women under the command of Moscho (Lambros Tzavellas' wife) participated in the battle. Eventually, 2000 Turk-Albanians and 74 Souliotes were killed. 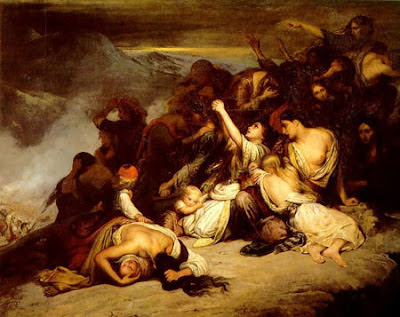 A painting by Ary Scheffer (1795 - 1858), "The women, entrapped, turned towards the steep cliff. It was December 16, 1803 when the dance began. As the enemy charged against them, the women one-by-one threw their children from the cliff before jumping after them themselves. The decision: to choose death over enslavement" (1827 - Oil on canvas, Musée du Louvre, Paris, France).

The Souliotes obtained all of their supplies from Parga, and also acquired support from Europe. Russia and France provided weapons and ammunition to them. For the European powers, the Souliotes were seen as an instrument to weaken the Ottoman Empire. When the British politicians turned to the Ottoman Empire in order to strengthen their forces against Napoleon, the weapons and ammunition supplies were interrupted. Without support from outside and wearied by years of siege, the unity of the Souliot clans started to split. The Botsaris family for political reasons left Souli and parleyed with Ali Pasha. However, the remaining Souliotes in Souli gathered together in Saint George's Greek Orthodox Church and decided either to win or die. The remaining Souliotes numbered at no more than 2000 armed men. The main leaders were Fotos Tzavellas, Dimos Drakos, Tousas Zervas, Koutzonikas, Gogkas Daglis, Yiannakis Sehos, Fotomaras, Tzavaras, Veikos, Panou, Zigouris Diamadis, and Yorgos Bousbos. The Souliotes won all of the decisive battles, which forced Ali Pasha to build castles in neighboring villages so as to prepare himself for a long siege. The Souliotes stayed without food and ammunition, but they could have held longer if not for a traitor named Pelios Gousis who helped the Ottomans to enter into the village of Souli. The Souliotes withdrew to the fortresses of Kiafa and Kughi, where they fought their last battle on December 7, 1803. They eventually capitulated and Ali Pasha promised to release them with all of their property and even weapons to the Ionian Islands. On December 12, 1803, the Souliotes left Souli towards the coast of Epirus. A monk named Samuel remained in Kughi and set fire to the powder magazines with a massive explosion that cost him his life. In the meantime, the Ottoman army attacked the other Souliotes, neglecting the promises Ali Pasha had made to them. In a famous incident on December 16, 1803, the so-called Dance of Zalongo, 22 Souliot women were trapped by enemy troops and committed suicide to avoid capture. According to tradition they did this by jumping off a steep cliff one after the other while dancing and singing. Other Souliotes also reached the harbor of Parga, which was under Russian control at the time. The Souliotes either settled down in Parga or set off for the Ionian Islands.

Diaspora:
Many Souliotes entered service with the Russians on Corfu, where they became an important component of the Legion of Light Riflemen. This was a regiment of irregulars organized by the Russians among mainland refugees; it not only included Souliotes, but also Himariotes, Maniots, klephts (Greek bandits) and armatoloi (Greek anti-klepht militias created by the Ottomans that actually supported the klephts). The Souliotes participated in campaigns in Naples in 1805, Tenedos in 1806, Dalmatia in 1806, and during the defense of Lefkada in 1807. With the Treaty of Tilsit in 1807 and the détente between Russia and France, the Russian forces withdrew from the Ionian Islands and the French occupied them. The Souliotes and other components of Russian units entered service with the French in a unit known as the Albanian Regiment (Régiment Albanaise). During the Anglo-French struggle over the Ionian Islands between 1810 and 1814, the Souliotes in French service faced off against other refugees organized by the British into the Greek Light Infantry Regiment. Since the Souliotes were mostly garrisoned on Corfu, which remained under French control until 1814, very few entered British service. 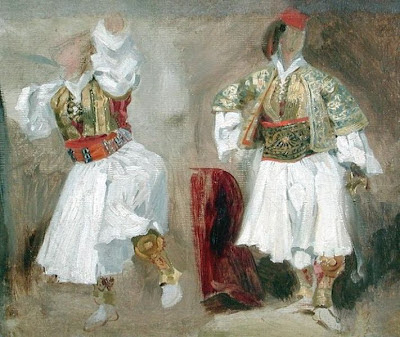 Souliotes in traditional costume. Oil painting by Eugene Delacroix 1824 - 1825; Louvre Museum, France.
The British disbanded the remnants of the Souliot Regiment in 1815 and subsequently decommissioned their own two Greek Light Regiments. This left many of the Souliotes and other military refugees without livelihoods. In 1817, a group of veterans of Russian service on the Ionian Islands traveled to Russia to see if they could get patents of commission and employment in the Russian army. While unsuccessful in this endeavor, they joined the Philike Etaireia ("Company of Friends"), the secret society founded in Odessa in 1814 for the purpose of liberating Greek lands from Ottoman rule. They returned to the Ionian Islands and elsewhere and began to recruit fellow veterans into the Philike Etaireia, including a number of Souliot leaders. When there were clear signs for the beginning of a Greek insurrection against Turkish rule, Ali Pasha saw an opportunity to make Epirus into an independent state. In 1820, he called upon the Souliotes for help, and they returned to the mainland to support their former enemy against the Sultan. However, Ali Pasha's plans failed and he was killed while the Turks occupied Ioannina. The Souliotes eventually gave their support for the Greek Revolution, which started on March 25, 1821. The Souliot leaders Markos Botsaris and Kitsos Tzavellas became famous generals in the Greek War of Independence. Many Souliotes lost their lives while defending the city of Messolongi. Lord Byron, the most prominent European philhellene volunteer and commander-in-chief of the Greek army in Western Greece, tried to integrate the Souliotes into a regular army. Until 1909, the Turks kept a military base on the fortress of Kiafa. Finally in 1913, during the Balkan Wars, the Ottomans lost Epirus and the southern part of the region became part of the Greek state.
Souliote clans:
Antonopoulou (akin to the Botsaris clan; from Vervitsa/Tropaia)
Kapralaioi (resettled in Messenia)
Setaioi (resettled in Messenia)
Douskaioi (resettled in Messenia)
Dentaioi (resettled in Messenia)
Tzavaraioi (resettled in Arcadia)
Posted by PANEPIROTIC FEDERATION OF AUSTRALIA at 9:01 PM