Between 4-5 October 2008, the first national conference of the SAE (Council for Greeks Abroad) Oceania Youth Network took place in Sydney. 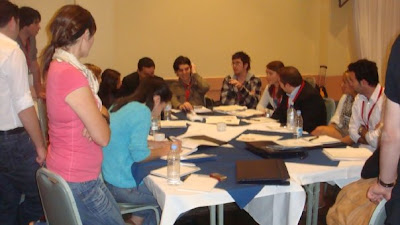 Calliope Kalimniou, the youth representative of the Panepirotic Federation of Australia attended the conference as a Victorian delegate and was elected to the Australian SAE Oceania YOuth co-ordinating Council. 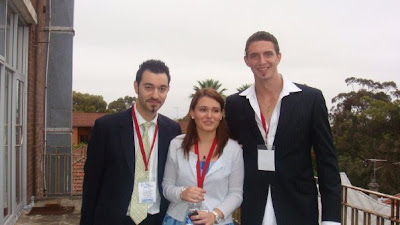 While providing a detailed appraisal of the situation in Northern Epirus, in her keynote address, Calliope Kalimniou said the following:

"Here in Australia, at the commencement of the 21st century, already many of us, though possessed of all our senses, are not able to share the unique privilege that Helen Keller had. Yet if it is true, as Cafavy said, that the important thing in life is not the destination, but the journey, then SAE Youth offers a unique opportunity for fellow travellers to float upon the immense waves of Hellenism, picking their own path towards their heritage.

As a member of the Greek community of Victoria, one of the largest Greek communities in the world, I feel privileged to be able to explore the many facets of our heritage. As a member and representative of the Panepirotic Federation of Australia, I bring another perspective, that of the poor , persecuted Greeks of Northern Epirus, enduring terrible hardships just to retain their Greek culture. The fact that people, my own people are willing to suffer and even die for their religion and identity teaches me not to take my identity for granted. The fact that my people, the people of Epirus have a long tradition of philanthropy and are known as the benefactors of Greece, founding the Polytechneio, the Academy, the University, building the first National Bank, the Zappeion and the Panathenean stadium provides an example and a commitment to Hellenism that I must follow. This is what keeps it real for me.

Along with my organisation, which not only raises money for Northern Epirus, is the only Greek-Australian organization that through SAE has raised money to build schools, provides lectures on topics dealing with Greek history and culture, actively assists the Pan-Macedonian Federation and the Cyprus community in the promotion of their causes and provides free tutoring to students of Modern Greek at a tertiary level, I feel committed to preserving and re-interpreting our own Australian brand of Hellenism.

This is why I feel compelled to participate in SAE. I believe that I can bring to it, not only the 4,000 years of my own cultural tradition but novel ways in which to disseminate this to our generation - a generation removed from Greece at least physically.

I would like to strive to see that Greek events that visit only the major cities on the east coast get to visit more outlying pockets of Greeks out there. I would love to see increased representation for the more outlying states so that they can have a greater say in the way the Greek government and the more populous states assist them to keep in touch and retain their culture. New Zealand for example, should be treated as a separate entity, so its own issues can be dealt with effectively. Tasmania, is a state that we have ignored for too long. Together, we can makes sure that the right amount of emphasis is given where it is needed most. This can be done through the staging of sporting, cultural and musical events in these states in ways that will challenge and entice, as well as inform and entertain.

At the end of the day, I would hate to see SAE Youth as just another shop front for the Greek government or the SAE Seniors to boast that it exists but has no substance. Collective, broad-based democratic decision making must be the key, without glossing over the particularities and special needs of each state. In each state, we must find the means to bolster the activities of existing organizations and slowly institute succession planning so that we can perpetuate these. This is the way we can make sure that our communities stay vibrant - by being in the thick of it - not cutting ourselves off from the older generation. We have so much to learn. The Panepirotic Federation for example, lends a hand with the Antipodes Festival, the Cyprus rally, the Pontian Genocide commemoration and almost every other single cultural endeavour in Melbourne. We must find the means to inspire and draw closer, youth who feel alienated or unrepresented by existing structures. Programmes must be instituted to reach out to youth where only one parent is Greek. - this is a sector that is largely ignored by the mainstream but we can be the bridge linking them back to a mother culture before it is lost. There are young Greeks out there doing remarkable things, like making movies that are shown at the Cannes Film Festival. We need to seek out these talented Greeks and harness their skills and energy.

Most of all, we can all make an effort to promote the Greek language. In Melbourne we all recognise that language is one of the most important links with one culture. It is also the most difficult to maintain. Together, we can support and inspire, encourage and provoke each other to maintain and improve our language skills. We can demand, of the Greek government, of existing schools and of ourselves, the creation of programmes suited to us and to the generations that will come after us. We can make sure that outlying states maintain the vital communication links with populous states and with Greece so that the vital umbilical cord with the motherland is not lost.

This conference is a historic occasion. It marks the emancipation of a Greek-Australian youth that up until now has been at the backwater of Greek-Australian society. Together we have a chance to pick up where luminaries like St Kosmas the Aetolian and Rhigas Feraios left off. It is our turn to become apostles of Hellenism and to go back to the grassroots- preaching our identity. Of course the challenges of a complex and post-modern world are immense, but our resolve and our spirit is just as immense. I want to be a part of this immense αποστολή.

Because above all, I know this. We are the ones responsible for the future, not the first generation. We need to work hard, we need to be united. That way in years to come, when later generations point the finger and ask us what we have done for them, we will be able to point to this day, to the people in this room and extol their many achievements. I want to be a part of that. I want to shape our future, in collaboration with all of you."
We congratulate her on her achievement.
Posted by PANEPIROTIC FEDERATION OF AUSTRALIA at 10:09 PM No comments: