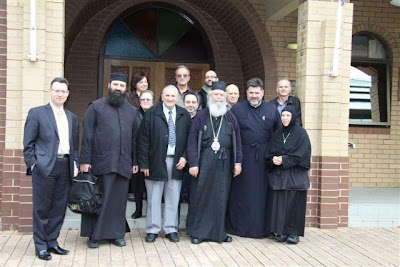 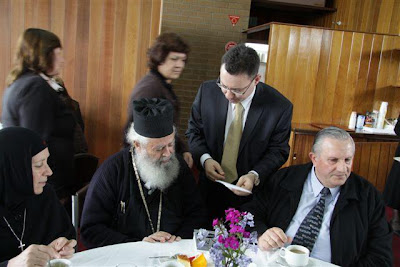 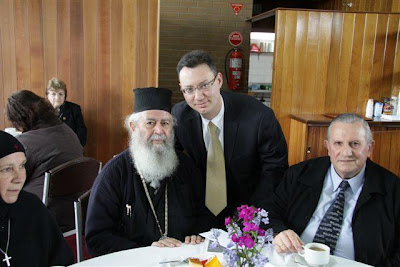 Posted by PANEPIROTIC FEDERATION OF AUSTRALIA at 4:34 PM No comments: 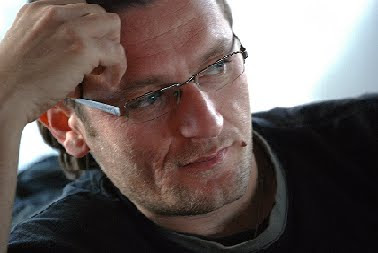 Over the years, I have encountered not a few members of the Greek community, who, for their own reasons, usually political, seem to experience trouble in acknowledging that there exists in Albania, a native Greek minority that does not enjoy all the rights that are taken for granted in western democracies. Over the years, organisations such as the Panepirotic Federation of Australia that have striven to highlight abuses of such basic human rights as the right to speak or be educated in one’s native language, freedom of worship and self-determination, have been met with derision in the worst case, and generally, with benign disinterest.
The fate of some 300,000 Albanian-born Greeks is a topic that has often sparked the ire of Greek consular officials. When advised of the arbitrary and chaotic way in which licenses were granted (or rather withheld) by the Albanian government for the operation of Greek schools in Albania, the immediately former Consul-General of Greece smugly told me: “So what do you want me to do? Kill all the Albanians in Albania and let you people take over? That’s what you want isn’t it? If you don’t stop talking about this issue within the community, there will be consequences.”

Perhaps the death of a 37-year-old ethnic Greek man in the coastal town of Cheimarra, a few weeks ago, who was reportedly run over by Albanians for speaking Greek in his own shop, will convince inexplicably hostile parties such as the abovementioned, that serious human rights abuses are being visited upon the Greeks of Albania and that hiding ineptitude and impotence under the guise of lashing out at so-called “nationalists” and “extremists” who draw attention to their plight, results in a further deterioration in the quality of life of a people that have basically been abandoned by their compatriots around the world. According to eyewitness reports from Cheimarra, in the days leading up to the murder, the Albanian Prime Minister Sali Berisha was officially opening roads in the region, accompanied by a claque of bussed-in supporters chanting slogans and waving Albanian flags. Several of these supporters became incensed at hearing the Greek language spoken in Cheimarra, as Cheimarra, is held by the government to be an Albanian region, it being left out of the designated Greek minority zone by the previous communist regime as a reprisal for the predominantly Greek inhabitants of the region refusing to collaborate with the communists. Ever since the institution of “democracy” in Albania, Cheimarra has become a hot-spot, especially during election time, where incidents of violence by Albanian nationalists, intimidation of Greek voters and even the theft of ballot boxes so as to minimize the chance of Greek candidates being elected has become common. In a recent trip to Cheimarra, I met with a resident who was stabbed by an unidentified masked man as he was waiting in line to vote. Cheimarra, which now has a mixed population owing to the resettlement of Albanians in Greek areas during the communist era, is a problem, simply because the presence of Greek speakers and the election of a Greek mayor belie fifty years of propaganda.
Consequently, the reason why some elderly Greek inhabitants of Cheimarra were threatened by knife-wielding supporters of Berisha to stop speaking Greek can easily be discerned. A few hours later, Aristotelis Goumas was subjected to a tirade of abuse by three Albanian men from Avlona, for speaking Greek in his shop. When he asked the men to settle the issue outside, they rammed his motorcycle with their car and then ran over him twice. The culprits suspects were charged in the incident, , while local media referred to a traffic accident instead of a possible homicide and no police press release was issued.
The Albanian Prime Minister, Sali Berisha, appeared to condemn the attack, stating: “This is an act of extreme and blind fanaticism. I cannot believe that Albanians do not know that this town is bilingual and has been for 100 to 200 years.” In actual fact, his statement is more insidious than meets the eye. People have been speaking Greek in Cheimarra, an ancient Greek colony, continuously for over 2,000 years. The Albanian PM is, in condemning the specific act of violence, attempting to perpetuate the well-worn lie propagated by many Albanian historians that Greeks are merely recent migrants to the region, with no historical ties to it. This cynical statement insults the inhabitants of Cheimarra and gives them cause to worry about the future.In Athens, foreign ministry spokesman Grigoris Delavekouras said the incident and information that the alleged perpetrators acted out of ethnic prejudice have unnerved the Greeks of the region: "Such unacceptable and criminal acts aim to generate ethnic tension, with unforeseen consequences, and to undermine Greek-Albanian bilateral relations . The Albanian government must guarantee the proper and swift dispensation of justice, something that will comprise the only answer, in practice, to the reasonable concerns of the Greek national minority in Albania."
Words do not go far enough this time. How many people need to be killed and intimidated, how many confiscated pieces of land need not to be returned, how many schools need to be permitted operation, how many churches vandalized before it is realised that the Albanian government cannot or does not want to protect its Greek citizens? How much more suffering do the hapless Greeks of the region need to endure before smug, short-sighted, dismissive and contemptuous Greek bureaucrats express hideous sentiments about their compatriots, who are putting their lives at risk in order to preserve their identity and who have done so for a century, unassisted by the Greek government?

Vangelis Doules, Member of the Albanian Parliament and president of the Union for Human Rights Party has demanded the institution of the Greek language as an official language of local government in the region, the inclusion of Greeks in the local police force, official recognition that Greeks exist in large numbers over a large region of Southern Albania and should enjoy the right to Greek education wherever they exist, not in an artificially designated minority zone. The institution of these measures would go a long way in ensuring peace and harmony in the region. Further, these measures are nothing new. They appear in the Protocol of Corfu that Albania signed in 1914, undertaking to grant regional autonomy to the Greeks of Northern Epirus. Nonetheless, the Albanian government refuses to grant any of these measures, and nor, despite the rhetoric, is the Greek government willing to make their granting a serious issue in their bilateral relations.

It is trite to remind readers that the Greeks of Northern Epirus were the major benefactors of the modern Greek state, or to highlight their suffering over almost a century of concerted efforts to deny them their identity. Yet if the death of ethnomartyr Aristotelis Goumas is not enough to galvanize the Greek government and Greeks around the world into some sort of concerted action in order that their compatriots are granted some basic protection under the law, then we should all question our commitment and affiliation to those ideals and those historical peculiarities that boost our self-esteem and grant us self-worth as people.

People, in the twenty-first century, are dying for the Greek language, alone. At the same time, our system of Greek-language education in Australia is fast unravelling. A photo of Aristotelis Goumas should be placed in every classroom in every Greek school in Australia, as an example for and an indictment of us all. 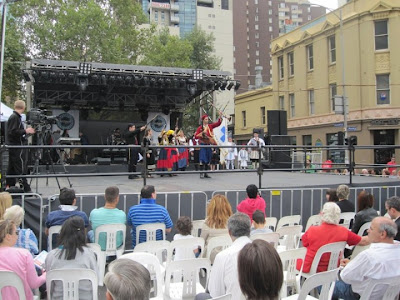 Between 27-28 March 2010, the Panepirotic Federation of Australia participated in the Antipodes Festival, the key festival of Hellenism in Melbourne. 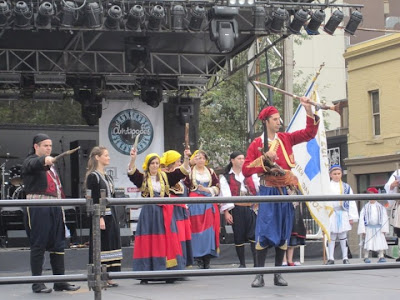 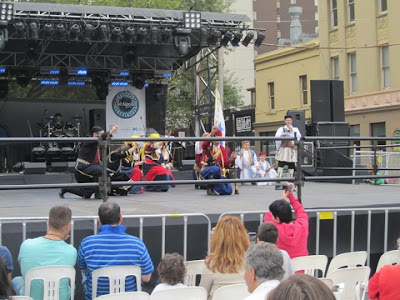 Members of the PFA assisted the Pan-Maniot Youth Association in writing, directing and performing a dramatization of the declaration of the War of Independence, on the centre stage in Lonsdale Street. 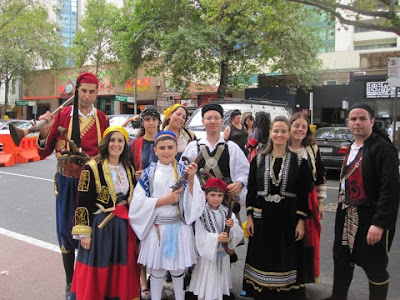 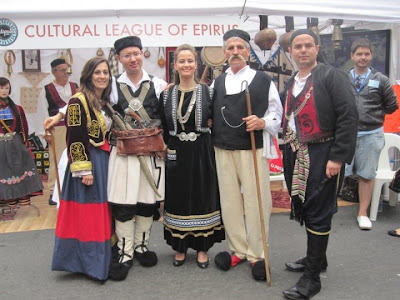 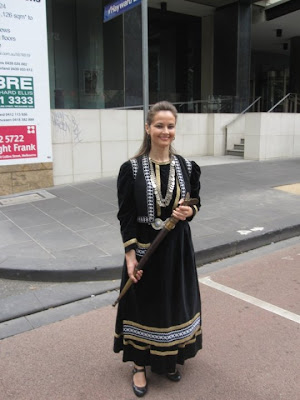 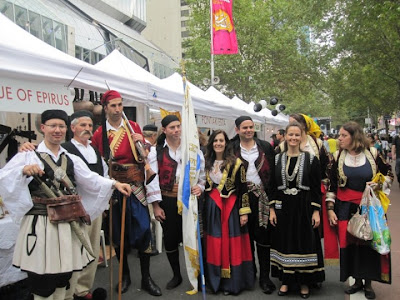 Posted by PANEPIROTIC FEDERATION OF AUSTRALIA at 4:56 PM 29 comments: