On 18 November 2007, 20,000 - 40,000 Greek-Australians marched to the centre of Melbourne, in order to express their gratitude at the Australian government's refusal to recognise the republic of Skopje as "Republic of Macedonia." The Panepirotic Federation of Australia, acting always in solidarity with the Pan-Macedonian Federation of Australia, played at active role in the Rally Organising Committee. 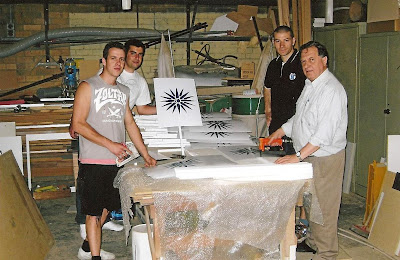 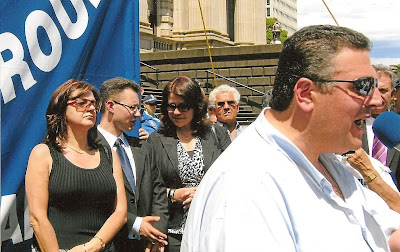 
“My fellow Macedonians. Here we are, at the steps of the bastion of democracy, before a very Hellenic in concept institution and in architecture building, as Macedonians. Truly that is what we are. For in the ancient Greek dialect of Macedonia, the word Macedonian, Makednos, signified that person who stood lean and tall.

This is what we are doing here today as Macedonians, standing tall, standing firm, committing ourselves to the concepts of pluralism, tolerance and multiculturalism that make this country and this state, so great. Let us not forget that the first institutor of multiculturalism was that great Hellene, the King of Macedonia and half the world, Alexander the Great. A man who spread Hellenism as far as India.

We stand here today, as descendants of Philip, the King of Macedonia, who united his Greek compatriots in a struggle against totalitarianism and for liberty and freedom.

And we also stand here today, as descendants of the great Macedonian philosopher Aristotle the author of the great work Politics, in which he describes all the political institutions of his time, which are the precursors of this Parliamentary institution. Aristotle taught us and the rest of the world to weigh our words carefully, to speak responsibly, with the force of truth and stand up for what is right.

We are here because every fibre of our being is as Macedonian as it is Australian, because as the great Macedonian Saint of the Orthodox Church, Gregory Palamas stated, it is only through contemplation that we are granted a glimpse of the eternal truth.Our eternal truth is that of our existence.

We are Greeks, the Greeks of Macedonia, THE Macedonians and have always been so, since the dawn of civilization itself.

Now there are those who in this tolerant country, this haven of peace and social cohesion, this harbour of humanity, who would deny us our right to call ourselves by our name, who would deprive us of our right to our own identity. And they would do so based on incorrect, misguided or deliberately usurped so-called information and cultural capital.

To these people we say:

NO one can usurp our identity.

Given this special relationship between Australia and Greece, we applaud the respectful and considered stance of the Government and the Opposition as to the issue of the naming of the Former Yugoslav Republic. We applaud the fact that our government encourages dialogue and supports a solution that both sides will find acceptable. We thank our government and the opposition for their balanced stance, which promotes tolerance, cohesion and solidarity in a troubled world.

Yet today, as we stand here in front of this Hellenic façade, designed for a Hellenic purpose, that of free speech, liberty and democracy for all, we the Macedonian community of Australia, as one united Greek-Australian voice say: That the only solution is one that recognises the unique Greek provenance of the term Macedonia.

That Macedonia, as a geographical entity, is not an acceptable name for a state that does not partake of the 4000 year old rich cultural history of Macedon and instead would usurp our own.From the government and the opposition, we would seek more than just assurances about their stance as to the name. We seek understanding and knowledge of what it is that makes the word Macedonia so dear, so important to us, so intrinsic to our own Hellenic identity.

For to do so is to descend to the core of what it is to be a Greek and by us being here today, reveling and rejoicing in our Macedonian identity, we have never been more Australian than now. Our diggers have taught us that.

Finally, to those who would assume our identity, and you know who I am talking about - the people who use our Kings’ Names on their airports, who have attempted to use our landmarks on their currency and who publish maps in which they occupy half of Greece, to those who would make light of it or disregard it as unimportant, we say only that which we hold sacrosanct and holy, we say only this:

That you will not take our name in vain.

And you know why?

Because we are Macedonian,

and we are goddamn proud.”
Posted by PANEPIROTIC FEDERATION OF AUSTRALIA at 9:56 PM