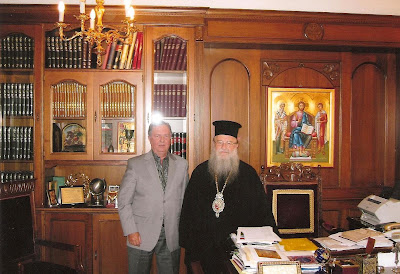 In August, P.F.A President, Dimitris Varnas went to Thessaloniki and paid his respects to Metropolitan Anthimos of Thessaloniki, the most senior-ranking cleric in Greece after his Beatitude Hieronymos, Archbishop of Athens. Dimitris varnas discussed the activiies of the Panepriotic Federation with Metropolitan Anthimos and sought his prayers and spiritual guidance for all members of the Panepirotic Federation of Australia. Thessaloniki is home to a vibrant community of Northern Epiroites and DImitris varnas thanked the Mteropolitan for his constanty attention to their spiritual and welfare needs.

Posted by PANEPIROTIC FEDERATION OF AUSTRALIA at 3:39 PM